The name "Ala" has a number of linguistic connections, indicative of various aspects of its nature: the Serbian & North Macedonian word "lamnja" (connected to the Greek word "Λάμια" or "Lamia") is synonymous with the Ala. Similarly, the Turkish word "ala" means "snake".

There is also the Greek word "χάλαζα" or "xalaza"/"khalaza"/"chalaza", meaning "hail". Furthermore, the Kashubian/Cassubian Slavic language has a word "hała", meaning "a large creature/thing". And perhaps most intriguingly, both the name "Hala" and "Ala" have a connection to the Early Slavic word "xala", derived from the root "xal", indicating a force of nature, or the fury of the elements.

Due to their shapeshifting nature, Ale can be seen in a number of different forms. Though, their true form is that of a woman whose skin, hair and eyes reflect some aspect of the sky (ie bright blue like a clear day, dark gray like stormy weather, deep indigo like midnight).

There is some potential for people to gain the favor of an Ala. Feats which have been known to get on the good side of an Ala include referring to them with terms of endearment (ie "Mother"), tending to their "pets" (forest animals which live around their home, especially owls, wolves and badgers) and not remarking negatively on the state of their home. In return, these favored people might receive the blessing of an Ala, in the form of flourishing crops, or similar gifts (even perhaps a treasure from the personal stash of the Ala).

However, while they tend to love woodland animals, most encounters between human(oid)s and Ale are negative. Ale use their powers relentlessly to antagonize the citizens of a given area, as well as their fields, crops and residences. Common attacks include drinking the milk of farmers' livestock (especially goats); "drinking crops" so they wither; using tornado-force winds to steal crops and property (destroying that which they do not take either for themselves, or for those they favor); targeting the moon and/or the Sun to cause eclipses.

Ale are known for not only their greed, but they are possessed of a remarkable gluttony. A favored treat for an Ala is a human (especially a baby or a small child, but as the mood suits, adults may also be targeted). As many as an Ala can get in their grasp, they will happily sweep away to their home (high in the clouds, deep in the forest, in a lake, around a spring, in a cave, in a huge tree, in the heights of a mountain or some other inhospitable landscape). An Ala's residence is almost always strewn about with bones and spilled blood from those they have devoured. 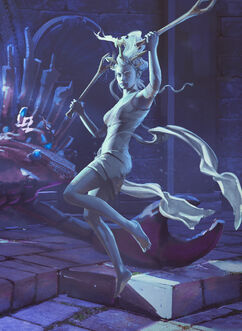 Retrieved from "https://warriorsofmyth.fandom.com/wiki/Ala?oldid=46831"
Community content is available under CC-BY-SA unless otherwise noted.