The Bugbear is one of a race of creatures with origins in English mythology, legend and folklore. In particular, stories of their exploits are often referred to in cautionary tales meant to frighten children into obedience.

While it is unknown what exact connection (if any) that Bugbears share with actual bears, or how they came to have bear-like traits, but the name of the species derives from the Middle English "bugge" ("something vexing/frightening", a "scarecrow") + bear, so, in essence, it is best referred to straightforwardly as "an annoying bear" or "a scary bear". 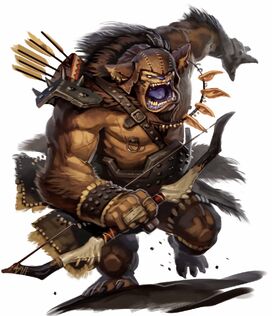 The body of a Bugbear is broad and ranges from husky to heavyset, though prominent members of their social group may also be muscular.

Their skin tends toward the tan and brown hues, and their ears almost always point. Their eye color can be any across the spectrum, with heterochromia being reasonably common.

Furthermore, as the latter half of their name implies, Bugbears have varying degrees of ursine (bear-like) traits. Some Bugbears may have bodies like a Goblin, Hobgoblin, Ogre, or Troll with only a bear-like nose, while others have a fully ursine head, and others may have bear-like hair, fangs and/or claws.

Facial hair is fairly common in male Bugbears, and not unheard of in females. Ears are most commonly pointed in more Goblinoid Bugbears.

Bugbears are known far and wide for their mischief. This may range from unwittingly being an annoyance with brutish habits (ie noisy and messy eating, flatulence, inappropriate humor) to pulling pranks, to outright menacing antagonism.

They have no particular general preference toward solitude or social groups; whichever situation allows a Bugbear to have fun or get back at those they dislike suits them just fine.

They have been known to vandalize and destroy property, start fights (or get involved in fights having nothing to do with them), stalk and scare those who happen across their path, and even go so far as to eat young children.

Bugbears find shelter wherever is convenient to socialize or distance as they please; thus, they can often be found in caves, wooded areas, hills or similar wild areas. Often, they wear animal pelts, leathers, tunics or perhaps simple loincloths.

No specific weaknesses are pointed out as particular to harming or killing Bugbears.

Retrieved from "https://warriorsofmyth.fandom.com/wiki/Bugbear?oldid=46961"
Community content is available under CC-BY-SA unless otherwise noted.