The Fext is an undead being first mentioned in Slavic mythology. Among its most famous mentions are its exploits in the time of the Thirty Years' War, during the 17th Century, in central Europe; in particular, in Bohemia and western Moravia (today's Czech Republic).

Some of the great generals and officers of that time were believed to be fexts, because of so many failed attempts to assassinate them. The name "fext" itself is derived from the German "kugelfest", meaning "bulletproof". However, the process by which one comes to be a fext has nothing to do with firearms or the military.

Rather, the common ritual requires that a child is born from its mother's womb in an amniotic cavity; the attached placenta is removed, dried and stored. When the child is old enough, the preserved placenta is held (or sometimes sewn) under the child's left arm. In some cases, the child may immediately die and return as a fext, while in other cases, the child may continue with life as normal, only to return as a fext after natural death.

It is also possible to return from death as a fext by use of dark magic, or by making a pact with dark forces (such as in exchange for one's soul).

Not to mention, there is always the possibility of a fext being born like a normal child (from two fext parents, or from one fext parent and a parent from another humanoid race).

The appearance of the fext is, for all intents and purposes, its appearance in life, beautified. One would be extremely hard-pressed to find an ugly or unattractive fext.

Their skin may be any color possible for their race (if their parents are a race other than human), but it will almost always be clear, free of spots, blemishes, wrinkles or scars (albeit perhaps paler). Their eyes may be any color, but will always be bright and vivid, or deep and contemplative. Their hair may be any length, texture or color, but will always be kink-free. They will almost always seem at the peak of health, beauty and vitality. For this reason, when they are discovered as being undead, they are often mistaken, at first, for being vampires. 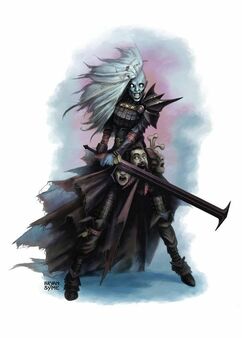 However, a fext maintaining its beauty is not guaranteed. If their origins are brought about by the practice of dark magic, the results can be a bit...sketchy. Though, typically, employing dark forces is successful to become a fext, there are cases in which consulting with a malevolent entity will result in being tricked. The resulting fext may lose his soul in the deal, and still end up vulnerable to age, or the decomposition of death. These are often mistaken, as time wears on, for being zombies.

A born fext has behavior typical of a human (or behavior typical of whatever other humanoid race they are born to). Those turned into fexts by supernatural means will retain their intellect (despite being undead) and have whatever personality they had in life, if they are not somewhat emboldened by their new-found, physically-enhanced, undead state.