The name has a root in the Proto-Indo-European root "neig", meaning "to wash", with relation also to the respective English and Swedeish words "näck" or "nek", meaning "naked/nude".

By nature, the Nix is able to change its shape. This includes various objects and animals and even humanoids. It is unknown whether the Nix has a "true form", or if its body is amorphous and subject entirely to the needs of attracting its next meal.

Some have seen the Nix as a lithe and handsome young adult human(oid), of varying skin colors, hair colors and hair type (commonly within a human-adjacent spectrum). Conversely, the Nix has also been seen, at times, in the guise of an old man with a long beard.

Others have crossed paths with the Nix when in a partly animal form. Perhaps they may have fish-like attributes (even similar to Merfolk), as suited to their life in the water. Or they may have traits like that of a horse (either a Satyr-like half-horse humanoid, or a white horse, perhaps with backward hooves, called a Bäckahäst/Brook Horse).

There are even times when the Nix appears as some glittery or interesting object, that catches the eye, while floating in the water.

Homes in which the Nix may be found include lakes and rivers, especially if deep and secluded.

Guileful and cunning, the Nix is a mischievous spirit that delights in the predatory mandate that its diet requires.

Slipping quietly through murky lakes and streams, a Nix has spends a good part of its day observing its environs for potential prey, to decide how best to lure the unwitting target to a watery doom. 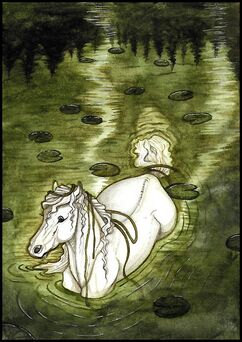 As an object floating in the water, a Nix may play on the greed or curiosity of passersby its home. A Nix may elicit the awe and excitement of a mark by approaching as a handsome Brook Horse; conversely, if that horse seems to be drowning in a lake, the Nix is sure to exploit the sympathies of an unwary victim.

Or, to stir the lustful mind, some Nix play a game of attraction and seduction, by appearing as a handsome or beautiful youth, looking for a good time. These Nix may be seen wearing decent or fine clothing (often stolen from those they have drowned, or who they have found after drowning), but most likely, they appear entirely naked.

If such tactics fail, however, a Nix resorts finally to its enthralling song.

It should be noted that, although rare, some Nix have been known, despite their own dangerous nature, to use their voice as a warning of impending death, especially by drowning.

Retrieved from "https://warriorsofmyth.fandom.com/wiki/Nix?oldid=47314"
Community content is available under CC-BY-SA unless otherwise noted.