The Troll is one of a race of creatures with origins in the mythology, legend and folklore of Scandinavia. Though, accounts of their existence expand throughout a great many of Europe's (physically or culturally) adjacent lands. Trolls are a species best known to have history in Canada (including among the Inuit), Denmark, the Faroe Islands, Finland, Greenland, Iceland, Norway, the Orkney Islands and the Shetland Islands.

Trolls are perhaps the most polymorphous of the Goblinoid races. Ancient texts have referenced some Trolls easily matching, even dwarfing the physical size of Giants, and perhaps having as many as nine heads. Some can match size with Ogres and Orcs, while others match in human range, and some may reach adulthood without surpassing the size of a Dwarf, or even a Gnome.

Physical build of a Troll may range from rotund, to husky, to muscular, to curvy, to lean, to gaunt and gangly. Some Trolls have a slightly longer and/or wider trunk/abdominal region (proportionate to their size class); a hunchback is possible, but not common. They have also been seen to have particularly long fingers arms and/or legs (proportionate to their size class) or longer fingers/toes. Claws may replace typical fingernails and/or toenails. 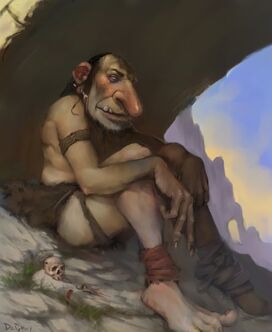 In some cases, Trolls may have wild hair, stringy, shaggy or bushy (this may include excessive facial or body hair), while others have beautiful hair (brown and ginger/red are reasonably common). It is also possible for a Troll to be nearly or totally bald (regardless of age or sex).

Skin color may include human hues (pale/"white", tan, shades of brown), but can also include shades of gray or green. Perhaps the most common factor between Trolls' skin is a range of rough texture, as well as a high likelihood of warty protrusions (not unlike the skin of a toad).

A number of trolls have noses considered broader, wider, more bulbous, more crooked/bent and/or perhaps longer than human norms. Ears, in some Trolls, may be pointed, or broad and round, or have a narrowing shape. Their eyes may be any color, but some may have eyes which glow, while others' eyes may seem dull, and others besides those may seem glossy and watery.

It is also fairly common for Trolls to have a relatively long philtrum (the space between the nose and upper lip). Though, some Trolls may have a pronounced overbite (in some cases, an underbite). Some Trolls have teeth akin to humans, while others have fangs, or some combination of both. Tusks are also a possibility.

Though, in some places, Trolls may be indistinguishable in shape, size and features from an ordinary human. 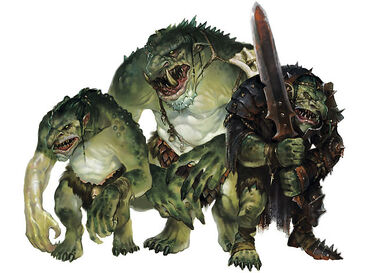 Trolls tend to either live solitary or in small groups (family/mates and/or close/long-time friends).

They commonly live in, on or around hills, as well as under the shade of secluded buildings and structures (ie bridges). A number of Trolls also live underground (and the homes of older or stronger Trolls might be deeper underground, perhaps adorned with precious metals or precious stones).

If not able to remain in a shaded area (including the comfort of shaded, hooded clothing), Trolls will come outside only during times when the sky is dark (ie evening, night time, the approach of rainy weather).

When tales mention interactions between Trolls and other humanoid races (especially humans), it is rarely on positive terms. Some Trolls may tolerate the presence of outsiders, while others become irritable in their presence, and others may regard outsiders with rudeness and spite. 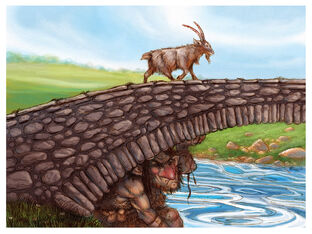 They have also been known to play tricks, ranging from annoying to cruel. They can be intimidating stalkers, malicious bullies or vicious tormentors. Some have even been known to kidnap humans and other humanoids of similar or smaller size, if not for servitude and/or abuse, then perhaps to eat. Some have gone as far as to refer to Trolls as "an enemy of mankind".

Clothing for Trolls tends to be scarce, from a loincloth to a simple tunic, though older Trolls (perhaps mages) have been known to wear long gray coats and red caps.

While many studies of the species note that Trolls are not Christian, it should be clarified that they tend not to worship divinities generally. Rather, the reverence of Trolls is more geared toward their ancestors, elder family members, their mages and/or the physically larger, more powerful among them.

Retrieved from "https://warriorsofmyth.fandom.com/wiki/Troll?oldid=47363"
Community content is available under CC-BY-SA unless otherwise noted.