The Vila is a creature with origins in Slavic mythology, legend and folklore. In particular, they are often regarded as a type of Slavic Fairy or Nymph.

Many believe Vily are the spirits of women and girls who died after having been frivolous or idle (unproductive) in life.

Vily are a single-gender race, composed solely of women. These ladies vary in height and weight, as well as hair length and texture, eye color and skin color.

Though, one common feature unites Vily, despite the varying traits of their looks: one will never find a homely, underweight or overweight member among them. And to show off the sylphic or voluptuous figure of their natural form, Vily often appear either in thin, diaphanous gowns, or perhaps entirely naked.

Aside from this, a number of animal forms are also available to them, by virtue of shapeshifting abilities (as described below).

Vily are known to largely be upbeat and energetic, some even being regarded as lighthearted and flirtatious. They delight in singing, dancing, playing and fighting. Often, they make beautiful homes in forests (especially mountain woods), but some Vily have been known to live in the clouds, waters like lakes or the like.

They have a special fondness for animals, as well; if they find them wounded in the woodlands where they reside (especially deer), they will not hesitate to heal them. Vily also commonly make use of their powers to bridle deer (especially seven-year-old harts) with snakes, to ride them as mounts. And if they find wanderers in the wilderness, some Vily may be inclined to warn them of impending natural disasters (ie avalanches), but especially if they have a dog with them (which the Vila would hope to keep safe). Some even believe that dogs are among the Vila's favorite animals. The relationship that Vily have with humans, on the other hand, is a bit more complicated.

Generally, Vily prefer not to involve themselves with human affairs. Yet, children who have been cursed by their parents (even if those parents merely speak off-hand in a moment of anger) have, in some cases, been snatched away from their families into the care of the Vila, who will feed them honey and instruct them in knowledge of nature and the supernatural.

And people have been known to gain favor of a Vila by gifting them with offerings (ie fruits and flowers left in caves, cakes left near wells, ribbons hung on the branches of trees). Those so favored by the Vila are called Vilenik. 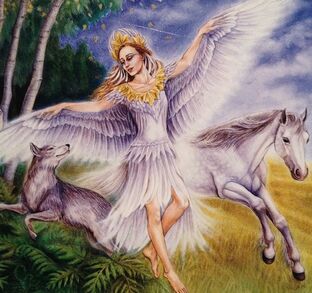 However, Vily are also known to react severely to certain offenses. If a man defies them, or unwanted intruders drink from their lake or river, or if their dance around a sacred tree is interrupted (particularly a cherry tree), they have been known to attack with bows and arrows, or in some cases, lure the interloper to dance, to the point of death by exhaustion.

Some Vily have been known to have romantic relationships, or even marry. In these unions, they are happily dutiful wives. However, if the reminders of the wilderness grow too strong, they will depart the relationship forever. And if their union with a man results in a child, Vily have been known to leave them in the care of mortal women (though they will still keep close watch over them).