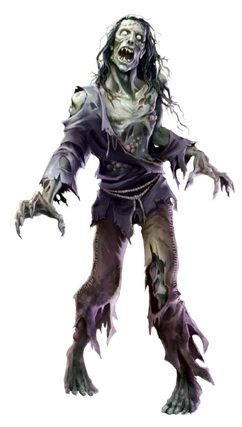 The Zombie is a creature with origins in African mythology, Haitian mythology and North American folklore and legend. As of recently, they have grown to great prominence in the mythos of the United States of America.

While animal zombies do exist, the generic description indicates the form of a deceased humanoid. The means by which the zombie died remains however apparent it was at the time of death; though the zombie moves, its wounds do not heal. In fact, the most apparent and widely generalized feature shared by all zombies; though they move around like living beings, zombies continue to decay, like any other dead (or undead) creature.

With the exception of a select minority, Zombies are creatures almost exclusively devoid of cognition. All personality that a Zombie had in life often fades away, leaving only room for dull, hungry desperation in its place.

Rather than deciding where to move, Zombies are merely drawn to stimuli which "may be food"; they are known to be drawn to lights and sounds, as well as the smell of blood and/or living flesh.